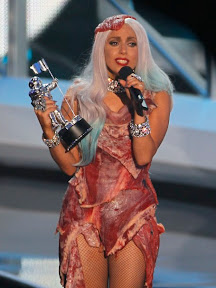 According BBC, Lady Gaga has defended the ‘meat dress’ she wore at the MTV VMAs saying it was not disrespectful towards “vegans and vegetarians”.

The singer told US chatshow host Ellen DeGeneres that the outfit was a protest against the way the army in America treats gay soldiers. Lesbian, bisexual and gay people can serve in the US military as long as they don’t reveal their sexual orientation.

Since the 24-year-old wore the outfit there has been some debate as to whether the dress was made of raw meat.

Writing on her website DeGeneres added: “First of all, yes, it was real meat.”

Lady Gaga ‘Offensive’ Outfit: Meanwhile, PETA (People for the Ethical Treatment of Animals) have warned that young people who disagree with the Bad Romance singer’s attire will stop buying her music.

In a statement they said: “Wearing a dress made out cuts of dead cows is offensive enough to bring comment, but someone should whisper in her ear that there are more people who are upset by butchery than who are impressed by it.”

Elaborating on her choice of fashion during the DeGeneres interview – which took place after the VMAs – Gaga said the dress had “many interpretations”.

She said: “As you know I am the most judgement free human being on the earth.

Lady Gaga won eight awards at the ceremony in Los Angeles (12 September) including video of the year.