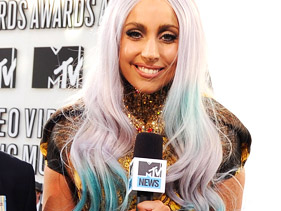 When Lady Gaga arrived at the 2010 Video Music Awards on Sunday, she did so with her usual aplomb — in a dress by the late Alexander McQueen — but, for perhaps the first time ever, it was her entourage that grabbed the headlines.

Of course, Gaga wanted it that way. She walked the white carpet flanked by servicemen and women who had been discharged from the U.S. Air Force and Army for being openly gay or bisexual, a violation of the long-standing “don’t ask, don’t tell” policy. And when she stopped to talk with MTV News’ Sway, she let viewers know exactly how she feels about the policy.

“I’m here for a very, very important cause today. These are all my friends, and they’re with SLDN.org, which is an organization that was founded in 1993 [as a] reaction to ‘don’t ask, don’t tell’ policies, and their stories are so inspiring,” Gaga said of the Servicemembers Legal Defense Network, immediately boosting Web searches about the organization, Yahoo! reported. “These soldiers that are with we today have all been discharged from the Air Force or Army, or opted to leave on their own. … Their stories are truly inspiring, and in my opinion — and as so many young people around the world believe — ‘don’t ask, don’t tell’ is wrong, it’s sick, it’s immoral.”

Gaga added that she hoped having SLDN members David Hall, Katie Miller, Stacy Vasquez and Mike Almy with her would, in some way, help highlight the growing push to repeal “don’t ask, don’t tell” and urge her fans to contact Senate Majority Leader Harry Reid and tell him to overturn the legislation.

“The most inspiring thing about having them with me today is that we can spread the message about what the organization is all about,” she said. “We really need to get Reid to set a date to vote in the Senate for ‘don’t ask, don’t tell’ repeal. … No one person is more valuable than another person.”

In keeping with that message, on Tuesday (September 14), Gaga posted a tweet urging her 6 million followers to contact Reid and tell him schedule a Senate vote on a Defense Department measure that includes language to scale back “don’t ask.” Hours later, Reid responded via Twitter, writing that a Senate vote measure was scheduled for next week, adding, “Anyone qualified to serve this country should be allowed to do so.”