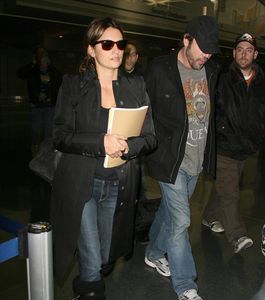 Pregnancy isn’t slowing Penélope Cruz down. She jetted to Paris to be with husband Javier Bardem this week. She was recently photographed in Puerto Rico filming her new movie and showing off her baby bump.

But this was no romantic break for the couple who tied the knot in July.

The expectant parents flew from Madrid to Paris late Monday, source tell the People. Javier Bardem, 41, was in the City of Light promoting Biutiful, the Spanish-language role for which he received the Best Interpretation Award at the Cannes Film Festival last May.

The discreet couple, who married in July, checked into a hotel off the Champs-Elyseés late Monday. Cruz, 36, who is 4½ months pregnant, was spotted in the hotel lobby “wearing a large thick wool sweater” while Bardem was interviewed by several journalists Tuesday morning, according to eyewitnesses.

The glowing couple lunched together in the hotel’s small courtyard and Bardem “couldn’t stop smiling, seeing his wife in front of him,” says one witness.

Penelope Cruz, who has been filming Pirates of the Caribbean: On Stranger Tides, is next scheduled to arrive in London to continue work on the film with Johnny Depp. Bardem is scheduled to continue promoting Eat Pray Love with costar Julia Roberts.