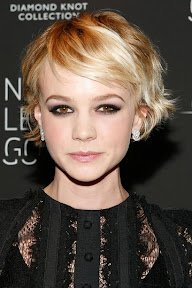 The British actress was nominated earlier this year for a best actress Oscar for her depiction of innocence shattered in “An Education.” Mulligan made her film debut in “Pride and Prejudice,” which co-starred Keira Knightley. Mulligan and Knightley co-star again in “Never Let Me Go,” but instead of playing sisters, they portray rivals in a haunting love triangle.

Without giving too much of the sci-fi plot twist away, the women ultimately learn that although they are less than fully human — and medically destined for an early demise — their souls are real. Speakeasy spoke with Mulligan and Romanek in New York last night, as they prepared for the film’s premiere.

We asked Mulligan how she accessed the very deep emotions called for in this role. “I really took my cue from the book,” she said, noting that her character “doesn’t have much to say and she’s an observer for much of the film. Every time I was in a scene where I wasn’t quite sure where I was going with it, I would go to the book and read through the lines because she’s unreliable, in that much of the time she’s not being truly honest with herself or the audience.”

Romanek said that Mulligan’s acting “has a style that is very unique, at least in this film. She’s sort of a minimalist and yet it resonates with a lot of emotion. It’s almost a mystical thing that she does. It actually affected the way I shot the film and inspired me to create a context for this unusual style of acting, a visual grammar for Kazuo’s style of writing, which is deceptively simple. It’s an interesting hybrid between a Japanese and British sensibility, so it has a reserve and an understatement to it.”

Because Mulligan is friends with Knightley, we asked her if it was difficult to play rivals when you’re really friends with someone. “No, it was fun!” Mulligan replied. “When you know somebody, it’s actually easier, especially since Keira and I are great friends. We can be really blunt and honest with each other, without feeling insulted or hurt.”

For more on “Never Let me Go” go to: ‘Never Let Me Go’ Review Revue.