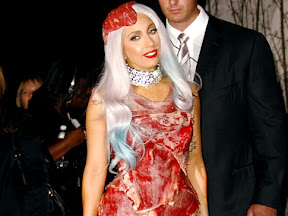 The latest on Lady Gaga has been her penchant for wearing meat dress, but now, it’s all about the tweet.

Lady Gaga, the flamboyant songstress famous for songs like “Poker Face” and “Bad Romance,” is also a strong voice for gay rights.

She made a video (which you can see below) asking viewers to contact their senators and lobby for the repeal of the military’s “Don’t Ask, Don’t Tell” policy — and then proceeded to call the offices of both Sens. Chuck Schumer and Kirsten Gillibrand on camera.

As Mediaite notes, “Unfortunately, the singer was met by two dead ends: nobody in Schumer’s office picked up the phone, and Gillibrand’s voicemail box was full.”

Still Gaga and Gillibrand managed to hook up on Twitter.

But later, Gillibrand tweeted: @ladygaga Thx for calling. I couldn’t agree more and am helping lead the fight to repeal DADT. Do you have a moment to talk later today?

No tweets from Schumer, but it looks like he and Gaga hooked up (NO, not like that) later.

Gaga tweeted back: @ChuckSchumer@SenGillibrand Thankyou for responding, it means so much that you support us on this issue. Let’s get this passed. Talk monday?

Gillibrand spokesman Glen Caplin said, “Senator Gillibrand welcomes Lady Gaga’s support for repealing this discriminatory policy. As the Senator has said many times before, ‘Don’t Ask, Don’t Tell’ is wrong for our national security and inconsistent with the moral foundation upon which America was founded. All New Yorkers should make their voices heard and join the fight on this important issue.”

Watch A Message From Lady Gaga to Senate Youtube Video:

Lady Gaga, engaging in a game of telephone: Lady Gaga — the meat-dress-wearing pop star known for, among other things, a song called “Telephone” — had some recent phone issues of her own. In a seven-and-a-half-minute video clip posted Friday on YouTube, — one that features a somber Gaga dressed in a muted suit and tie and sitting in front of an American flag — the MTV Video Music Award winner asks fans to call their senators and request that they vote for the repeal of the military’s “don’t ask, don’t tell” policy, if and when it comes to the Senate floor next week. As a demonstration of her own commitment, she attempts to dial up her own Senate reps, Chuck Schumer (D-N.Y.) and Kirsten Gillibrand (D-N.Y.), but with no luck. The phone at Schumer’s office rings for more than a full minute, then goes straight to a busy signal, and the call to Gillibrand’s office leads to a voice-mail box that’s full and won’t accept additional messages. (So that’s what the song “Telephone” is actually about!)

“It could have been because there was an overload of incoming calls to the office’s main line,” said Brian Fallon, a spokesman for Schumer, when asked to explain the communication breakdown. “We do keep up on voice mails and answer the phone every day,” noted Bethany Lesser, press secretary for Sen. Gillibrand. (For the record, it’s not uncommon for Senate voice mailboxes to fill up overnight after staff have gone home for the day, which may have been when Gaga called.)

In any case, the two senators — both are supporters of the repeal — made sure to follow up with Gaga on Friday. “Sen. Schumer has been a cosponsor of the bill to repeal the policy, and our office did convey that message today,” Fallon told us. Meanwhile, Gillibrand sent a message Friday to Gaga via Twitter: “Thx for calling. I couldn’t agree more and am helping lead the fight to repeal DADT. Do you have a moment to talk later today?” Lesser says the two didn’t get a chance to chat, but there’s always next week; Gaga later tweeted back: “Let’s get this passed. Talk Monday?”