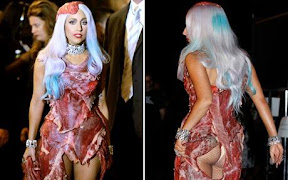 Lady Gaga meat dress designer has revealed that, it will be frozen and turned into beef jerky. She turned up to collect eight prizes at the MTV Video Music Awards 2010 earlier this month.

Lady Gaga’s gory ensemble, which she wore to the MTV VMA this month, was by Franc Fernandez. “The dress will go through a process where it becomes a sort of jerky and will be archived. It won’t be worn again,” he said.

He also has told the celebrity gossip website e-online: “The dress will go through a process where it becomes a sort of ‘jerky’ and will be archived. Thank you.”

The dress, complete with boots, purse and a hat made from cuts of beef divided internet opinion.

Cher, who presented the prizes, wrote on her Twitter account that as an “art piece it was astonishing!” and that the meat purse was “genius.”

A statement from People for the Ethical Treatment of Animals said that “wearing a dress made from cuts of dead cows is offensive enough to bring comment, but someone should whisper in her ear that more people are upset by butchery than are impressed by it”.

Lady Gaga told chat show host Ellen DeGeneres, who had presented her with a “veggie bikini” on air, she meant no disrespect to anyone that is vegan or vegetarian, and called herself “the most judgment free human being on the earth”.

“However, it has many interpretations. For me this evening, if we don’t stand up for what we believe in and if we don’t fight for our rights pretty soon, we’re going to have as much rights as the meat on own bones. And, I am not a piece of meat.”