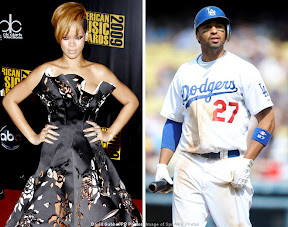 Los Angeles Lakers fan Matt Kemp is ready to take things to the next level with his girlfriend pop superstar Rihanna.The L.A. Dodgers center fielder is on the verge of asking the star, who he’s been dating for eight months, for her hand in marriage.

“They are in love. Seeing them interact, it’s definitely possible he could propose—but it’d have to be a long engagement, because they’re both so focused on their careers.”

As for what makes their relationship work, the insider credits Kemp’s “normal life”:

“He centers her, as he has a more normal life. He allows her space, but they text and talk all the time. And they really have fun like kids when they’re together. They like to laugh and be silly.”

We are hopefully, the duo were able to laugh off the rumor about her exchanging spit with ex-flame Drake on Tuesday night at Greenhouse during the afterparty for the rapper’s Radio City Music Hall concert. According to the story, first run by MediaTakeOut (no surprise there), Drake and Rih-Rih were engaged in a steamy make-out session and “they didn’t care who saw it.” Fortunately for the “Rude Boy” singer, GossipCop.com was able to quickly shoot down that “exclusive” story by speaking to a rep for Greenhouse who said, “Not true. We didn’t see any making out.” I didn’t think Rih-Rih was blind. If she’s going to cheat, I would hope the person she’s cheating with is cuter than the man she’s with. Nothing against Drake but, physically, he’s no Matt Kemp!

So, what do you think?