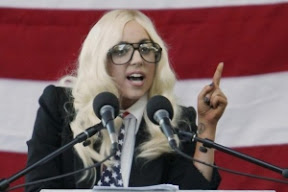 The24-year-old Gaga has notched another milestone on her road to global culture domination. Lady Gaga was recently named one of Forbes magazine’s World’s 100 Most Powerful Women list alongside CEOs, heads of state and media phenoms like herself.

According to MTV, Gaga took the #7 slot on the list, which was unveiled Wednesday (October 6), behind women such as German Chancellor Angela Merkel, U.S. Secretary of State Hillary Clinton and first lady Michelle Obama, who was named the most powerful woman on the planet (and is the first African-American to top the list). Gaga was the second-most powerful entertainer in the rankings, coming in behind Oprah, who clocked in at #3.

Other powerful ladies include Gaga’s “Telephone” collaborator Beyoncé (#9), talk-show host and former “American Idol” judge Ellen DeGeneres (#10), author and former Alaska Governor Sarah Palin (#16) and screen siren and activist Angelina Jolie (#21). Gaga is no novice when it comes to Forbes shout-outs. In June, she debuted at #4 on the magazine’s 2010 Celebrity Power List, due to her cash-magnet Monster Ball Tour, $62 million in earnings, Web popularity and deals with companies such as Polaroid and MAC. B was bumped two spots to #2 after raking in $86 million from her world tour, arsenal of endorsement deals and House of Deréon products. Oprah has been a Forbes mainstay, coming in at #1 this year on the Celebrity Power List after ceding the crown to Angelina Jolie the year before. The mogul snatched the top spot back with a nine-figure payday and media conglomerate that includes TV shows, magazines and more.

Perhaps Gaga will wield her hefty worldwide clout to push for her causes. A longtime gay-rights supporter, the entertainer has most recently waged a campaign for the repeal of the U.S. Armed Forces’ polarizing “don’t ask, don’t tell” policy.

The annual list was compiled and based not merely on the magnitude of individual popularity and prestige, but more importantly on “creative influence and entrepreneurship,” the magazine revealed.