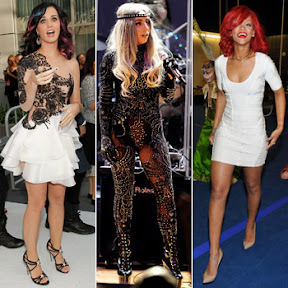 The pop star Lady Gaga not only are Katy Perry, and Rihanna three of the most popular singers in the U.S., but they have each cemented reputations as daring fashionist as who embrace the challenge of pushing the envelope on the red carpet of various high-profile events.

That’s why Rihanna, Lady Gaga and Katy Perry text each other before they appear publicly — to make sure they aren’t wearing the same thing. We never thought Mrs. Russell Brand would ever be in danger of going to an award show in a meat dress, but OK. We’ll buy it.

“My worst nightmare would be a clash on the red carpet – so we all text each other before to make sure,” Rihanna told The Mirror.

All three of the singers make serious fashion statements — whether they’re good or bad, we’ll let you decide. Except in the case of Rihanna. Did you see when she wore socks with those boring camel pumps?

But their personal styles differ so much that we really didn’t think they’d even consider the same options. According to Riri, not so. A few Met Galas ago, both had planned to wear a Dolce and Gabbana gown with Marilyn Monroe’s face all over it. Perry told Rihanna that she couldn’t have the dress.

“She was like, ‘You can’t. I’ve had my nails done in mink and it matches the dress,’” Rihanna said. “I thought, seeing as she’d gone to all that effort, I’d let her wear it.”

And for fear of getting our eyes scratched out by someone with mink nails, we would have done the same.