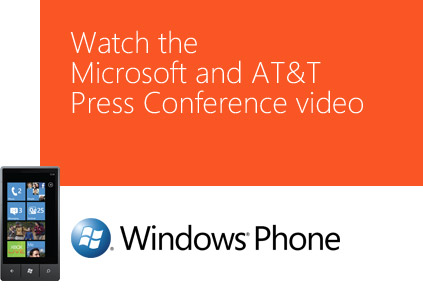 Microsoft press Release — Oct. 11, 2010 — Microsoft Corp. today joined its partners in revealing nine new Windows Phone 7 handsets that will be available this holiday season from leading mobile operators in Europe, North America and Asia Pacific. With more than 60 mobile operators in over 30 countries worldwide committed to bringing Windows Phones to market, the millions of people around the world looking for a phone that plays as hard as it works will have a variety of phones from leading device-makers to choose from.

“We have a beautiful lineup in this first wave of Windows Phone 7 handsets,” said Steve Ballmer, chief executive officer at Microsoft. “Microsoft and its partners are delivering a different kind of mobile phone and experience — one that makes everyday tasks faster by getting more done in fewer steps and providing timely information in a ‘glance and go’ format.”

Microsoft and its partners have worked together closely to create a different kind of phone with new experiences that bring together what people care about most. Windows Phone 7 will be available in a variety of sleek form factors from device-makers such as Dell, HTC Corp., LG and Samsung, and from mobile operators including América Móvil, AT&T, Deutsche Telekom AG, Movistar, O2, Orange, SFR, SingTel, Telstra, TELUS, T-Mobile USA and Vodafone. All Windows Phone 7 phones will include the high-performance Snapdragon™ processor from Qualcomm. A broad selection of phones will begin shipping in holiday 2010 with more arriving in 2011, including phones from Sprint and Verizon Wireless. In addition, select models will be available at Microsoft Store locations and from Amazon.