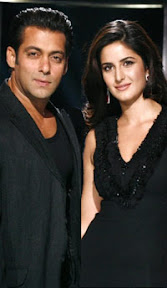 Because …. recently, there were reports running wild about the hot hunk Salman Khan and his hot lady love Katrina Kaif, not being on talking terms as of now. These reports were floating around when Salman and Kat were shooting at a common venue, the Mehboob Studio in Mumbai, for different projects, in different rooms, Entertainment and Showbiz reported.

Salman Khan has been shooting at Mehboob Studios for Dabangg, while Katrina Kaif was there for a photo-session for Zoya Akhtar’s film with Hrithik Roshan, Abhay Deol and Farhan Khan.

A witness present reveals, “Not a word was exchanged between the estranged couple.”

“SalKat were shooting in the same premises for almost the entire day but didn’t even bother to go say hello to each other. The air in Mehboob was rife with tension with people speculating what would happen when Khan and Kat stepped outside their vans and bumped into each other,” a news source added.

However, it’s not true. Because no one is sure now about Salman- Katrina relationship in on or off.