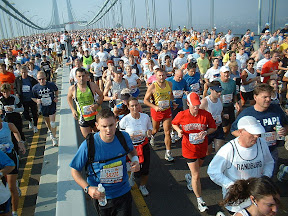 The New York City Marathon is this Sunday November 07, 2010. Runners of different nationalities will come to New York to join in the annual NYC Marathon.

This year the city of New York celebrated the 40th anniversary of the massive running competition.

The NYC Marathon is a popular event with over 700,000 past participants, 2 million spectators to cheer the runners and 315 million television viewers worldwide.

The run is being sponsored by ING and there is $600,000 to be awarded equally between male and female runners.