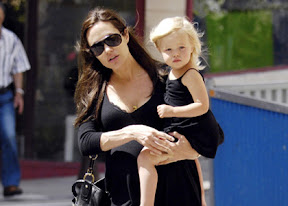 Angelina Jolie and Brad Pitt tomboy daughter Shiloh wants a soldier-themed party for her fourth birthday, according to US reports.

Shiloh celebrate fourth birthday on May 27 – and her famous parents are already planning a party for her.

Contactmusic quoted a Source as saying “Maddox had a soldier-themed party when he turned four, so Shiloh wants the same”.

The source added “She wants boys’ toys, since she’s such a little tomboy. Brad Pitt also bought Shiloh a jeep that is safe for kids, and he’s thinking of getting her a toy quad bike that she can drive around the property”.

Angelina Jolie daughter and Shiloh sister Zahara, who loves all things girlie, Shiloh likes boyish things, including clothes. Generous daddy Brad Pitt previously treated his daughter to $10, 000 of boys clothes from posh boutique, Bonpoint – we wonder what boyish treats Shiloh will get on her birthday?!