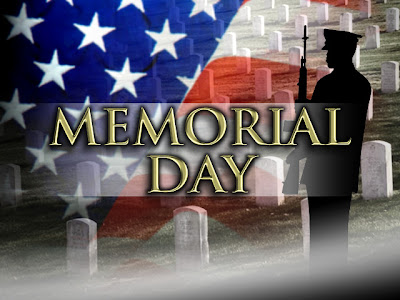 The collection of some of the most famous Memorial Day quotes and sayings:

*So long as there are men there will be wars. -Albert Einstein

*On thy grave the rain shall fall from the eyes of a mighty nation! -Thomas William Parsons

*Although no sculptured marble should rise to their memory, nor engraved stone bear record of their deeds, yet will their remembrance be as lasting as the land they honored. -Daniel Webster

*As I approach the gates of heaven;
St. Peter I will tell;
One more soldier reporting sir;
I’ve served my time in hell. -Mark Anthony Gresswell

*Green sods are all their monuments; and yet it tells
A nobler history than pillared piles,
Or the eternal pyramids.
-James Gates Percival

*For love of country they accepted death… -James A. Garfield

*The cost of liberty is less than the cost of repression. -Web Dubois

*Death leaves a heartache no one can heal, love leaves a memory no one can steal. -From a headstone in Ireland

*Blow out, you bugles, over the rich Dead!
There’s none of these so lonely and poor of old,
But, dying, has made us rarer gifts than gold.
-Rupert Brooke

*The brave die never, though they sleep in dust:
Their courage nerves a thousand living men.
-Minot J. Savage

*The legacy of heroes is the memory of a great name and the inheritance of a great example. -Benjamin Disraeli

*Let every nation know, whether it wishes us well or ill, that we shall pay any price, bear any burden, meet any hardship, support any friend, oppose any foe to assure the survival and the success of liberty. -John F. Kennedy

*They are dead; but they live in each Patriot’s breast,
And their names are engraven on honor’s bright crest.
-Henry Wadsworth Longfellow

*Peace to each manly soul that sleepeth;
Rest to each faithful eye that weepeth…
-Thomas Moore

*But the freedom that they fought for, and the country grand they wrought for,
Is their monument to-day, and for aye.
-Thomas Dunn English

*And they who for their country die shall fill an honored grave, for glory lights the soldier’s tomb, and beauty weeps the brave. -Joseph Drake

*Perform, then, this one act of remembrance before this Day passes – Remember there is an army of defense and advance that never dies and never surrenders, but is increasingly recruited from the eternal sources of the American spirit and from the generations of American youth. -W.J. Cameron

*The patriot’s blood is the seed of Freedom’s tree. -Thomas Campbell

*Decoration Day is the most beautiful of our national holidays…. The grim cannon have turned into palm branches, and the shell and shrapnel into peach blossoms. -Thomas Bailey Aldrich

*Better than honor and glory, and History’s iron pen,
Was the thought of duty done and the love of his fellow-men.
-Richard Watson Gilder

*War is too serious a matter to entrust to military men. -Georges Clemenceau

*Necessity is the plea for every infringement of human freedom. It is the argument of tyrants; it is the creed of slaves. -William Pitt