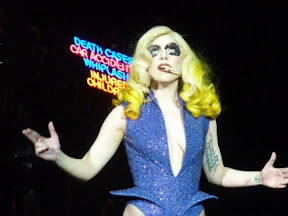 The US pop star Lady Gaga has taken the lead on Barack Obama in the race to become the first living person with more than 10 million fans on Facebook.

The first living person, that is. A Michael Jackson remembrance page has attracted more than 14 million friends.

Lady Gaga, who is as well-known for her bizarre outfits as her chart-topping music, had 9.76 million Facebook friends on Thursday.

The US president had more Facebook friends than Lady Gaga last week but she has pulled ahead in recent days.

Lady Gaga may have topped Obama on Facebook and Twitter but another pop star holds the title for largest number of followers on the micro-blogging service — Britney Spears, who has 5.24 million followers for @britneyspears.