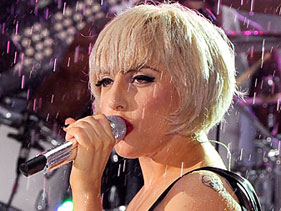 Lady Gaga Today Show News: Lady Gaga continues to build her iconography while breaking records and winning over new fans all at the same time. Earlier today, she played a hotly-anticipated, rain-soaked set on NBC‘s “Today.”

An estimated 20,000 fans gathered in Rockefeller Center in New York City (some of whom waited two full days) to watch Gaga burn through “Bad Romance,” “Alejandro,” “Teeth” and the new song “You and I.” Near the end of her performance, the scorching heat gave way to a downpour, but Gaga went right along with it.

Perhaps the greatest moment of the morning came when Gaga sat down at the piano for “You and I.” Though she has been playing the new song on the latest leg of her Monster Ball tour, the “Today” rendition represented the broadcast debut for the tune. It’s something of a departure for Gaga, as it is piano-based but not quite a ballad. Rather, it has the jaunty step of a slick cabaret tune (not shocking, considering that’s where Gaga’s roots are). It sounds like the best song Elton John never wrote.

“You and I” comes from an upcoming album that Gaga has supposedly written in its entirety, though it’s unlikely any actual recordings will see the light of day until next year. While it’s impossible to judge what the rest of the work sounds like, it’s reasonable to think that now that she has established herself as a pop star, she might return to the music that she truly loves, and since she has tag-teamed with John more than once, it would also make sense that his work would be a huge influence on her moving forward.

Which brings up an important question: If Lady Gaga is the new version of Elton John, then who will be her Billy Joel? John and Joel made history together as touring partners, regularly selling out rooms around the world with their “Face to Face” jaunts. Is there another performer who can assume the Joel role if Gaga wants to take her 88 keys on the road with her?

It has to be Alicia Keys, right? Can you imagine the greatness of those two princesses of the piano face-to-face on the stage of your local arena? Trading lines in songs, soloing and mounting their instruments (as Gaga did this morning)? Their aesthetics would compliment each other well, allowing them to play off each other — just like the relationship between John and Joel.

So make it happen, people! Gaga should put out her version of Captain Fantastic and the Brown Dirty Cowboy, then team up with Keys for an all-star piano attack.