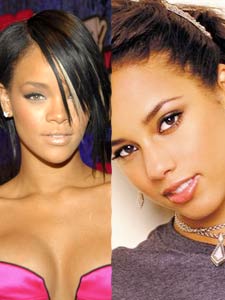 The actress, who played the young Nala onstage in the musical, The Lion King, was diagnosed with acute leukaemia in April and is in desperate need of a bone marrow transplant to survive, reports aceshowbiz.com.

Her emotional cancer fight has struck a chord with the two singers, and Keys paid a visit to Tavarez at Schneider Children’s Hospital to help lift the girl’s spirits.

Keys admits she has been touched by Tavarez’s story and is urging fans to sign up as potential donors, so the child and others like her can “grow up to live their dreams”.

“For her, the sky is the limit, but now she’s fighting for her life,” said Keys.

Rihanna has also asked her fans to help the cause before it’s too late.

“Tavarez should be performing on Broadway, but is confined to her bed, fighting for her life. She needs to find a bone marrow donor to survive. I urge all my fans to register (as donors). It’s the most beautiful thing someone could do, to give the gift of life,” said Rihanna.