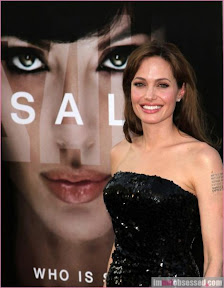 Hollywood super star Angelina Jolie and Brad Pitt was finally able to sit back and enjoy the Los Angeles, California premiere of her latest film, “Salt,” on Monday night and she after months and months of hard work.

Joined by life partner, Brad Pitt, the beautiful brunette looked stunning in Emporio Armani with Ferragamo kick as she mosied down the red carpet posing for pictures and talking to press.

In the action film, Ms Jolie plays CIA agent, Eveyn ‘Salt’ moivie, who is accused of being a Russian mole which takes her on a series of chases and fight scenes.

Jolie proudly revealed that she was able to do the majority of her character’s stunts in the film and of the movie’s stunt coordinator, Simon Crane, she says, “He’s really a genius.”

Enjoy the pictures of Angelina Jolie and Brad Pitt at the LA premiere of “Salt” .

Article pictures gallery, if you don’t watch pics just click on the link you can see.: