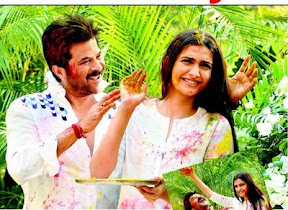 Anil Kapoor says it’s not westwards ho for daughter Sonam Kapoor, dismissing reports that the young actress is making a move for Hollywood.

The actor’s agent in Los Angeles is handling the offers for Sonam, including one for comic star Ben Stiller’s next, but she has turned them down.

“Sonam is only four films old in Bollywood. She needs to establish herself in India first before even thinking of doing an international project,” Kapoor told PTI.

The 50-year-old actor himself had got a head-start in Hollywood with Danny Boyle’s multiple-Oscar-winning film Slumdog Millionaire in 2009 and went on to star in the cult American TV show 24.

But Kapoor says he will focus on his Bollywood projects in the coming year, including No Problem, Race 2 and No Entry 2.

“This year I am going to focus on my Indian projects and I have not signed on for anything new in Hollywood. I will soon start work on ‘No Problem’ which I am producing and acting in,” said Kapoor.

The veteran actor is right now busy promoting his home production ‘Aisha’ which stars Sonam as the leading lady and also marks the debut of younger daughter Rhea Kapoor as a producer.

“I am happy with the film and my daughters have done me proud. I am more excited than nervous about ‘Aisha’ because I know they have worked hard and done a good job,” said Kapoor.

But the actor is nervous about the debut of 24 in India. His turn as President Omar Hussain, the peace loving leader of a fictitious Islamic country won him rave reviews in the US and he is hoping for the same here.

“24 begins telecasting in India in August and I am nervous about it. I hope that the Indian audiences like what they see because I was one of the first Indian actors on the show,” said Kapoor.

When asked whether he saw the role as a part of the racial stereotyping so prevalent in Hollywood, Kapoor laughed the theory off as intellectual bogus.

“Actually I would not mind playing a Middle Eastern man again, but the character has to be different. I have never actually given much thought to the whole racial stereotyping thing. I don’t try to intellectualise things, I just have to like the role,” said Kapoor.

His production house Anil Kapoor Film Company, which has churned out an eclectic range of films, from the multistarrer comedy Short Kut to the National Award winning Gandhi My Father works on the same principle.

“Earlier I used to go by my instinct and if I really liked the script I would produce it. Original content is still the main criteria for me along with a sound budget which minimises waste,” said the actor.

He is meanwhile leaving no stone unturned to promote Aisha and took to the ramp at the ongoing Delhi Couture Week.

Kapoor walked the ramp for designer Anamika Khanna along with Lisa Hayden, Amrita Puri and Ira Dubey, the three debutantes from the movie.

And Kapoor credits his style to the three women in his life, wife Suneeta and their two daughters Sonam and Rhea.

“My two daughters have thankfully inherited their sense of style from their mother. Suneeta actually rolled back her career as a designer in Delhi after we married and moved to Mumbai. But she has designed all the jewellery for Aisha,” said Kapoor.