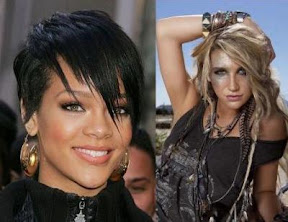 Rihanna and Ke$ha performs in New York City.There came onboard for the Last Girl on Earth tour at Madison Square Garden on Thursday night, Ke$ha, completely covered in glitter, got her personal party started with her club banger “Blah Blah Blah.”

“I cannot believe I am playing a show at the f—ing Garden. Holy sh– balls,” she screamed to the crowd midway through the song. “Are you guys having a dance party?” she later asked the excited crowd.

Ke$ha’s set was much like she is: sparkly, glittery, a little messy, but, overall, a good time. She played all her hits, including “Take It Off,” “Your Love Is My Drug” and the song that got all of MSG dancing, “Tik Tok.”

While the fans were tickled with delight for Ke$ha’s set, they really went nuts when Rihanna emerged onstage in a billowing black dress, with glowing lights inlaid into it. The star was ready to share with the audience her “dreams and nightmares,” as a projected video explained. The searing guitar of “Russian Roulette” welcomed the red-headed singer to the room before she belted out the ballad and kicked the show off. After a quick change into a blush-colored, shimmering bodysuit, she went right into her crowd-pleaser “Hard,” during which she very proudly rode her own baby-pink military tank.

During “Disturbia,” Rihanna embraced her inner Goth, thanks to dancers dressed as crow-like figures on stilts. After a short intermission, Rihanna declared her “Rockstar” status and played a little air guitar in a latex bodysuit and thigh-high boots. “Rude Boy” brought out the sassy and sexy Rihanna fans have come to love.

“Is New York City in the house?” she asked before she sang a medley of “Love the Way You Lie” and “Airplanes,” and then transitioned into “Hate That I Love You.” “I can’t hear you, New York! Anybody out there ever been in love?” she asked. For “Rehab,” she lounged sexily on a chaise.

Things got spicy when Rihanna, flanked by two dancers doing saucy acrobatics, sang her Spanish-tinged “Te Amo.” Then, dressed in an all-white “bandage” bodysuit, she kicked it old-school with her jam “Don’t Stop the Music,” throwing a dance party inside of a large cube onstage.

After displaying her guitar skills earlier in the night, Rihanna played some drums before performing a rock-influenced version of “SOS.” She then addressed the crowd: “Thanks, all of you who bought a ticket tonight to come see me. I’m at Madison Square Garden and thanks to you guys, we sold out Madison Square Garden — thank you so much.” Then she sang “Take a Bow” before, well, taking a bow.

She kicked off an encore with “Wait Your Turn,” in sparkly, knee-high boots, a matching newsboy cap, bra and spandex shorts. Rihanna played her second medley of the evening, combining party jams like “Live Your Life” and “Run This Town.” But she ended the night on her biggest hit, “Umbrella,” and in a dizzying sea of confetti, with fans singing along, she told the crowd, “Thank you so much.”

The show not only displayed her vocal abilities, but also her unabashed performance style; her world is part “Mad Max,” part “Twilight” and part OK Computer — and all Rihanna.
Rihanna and Ke$ha Photos:
[nggallery id=146]