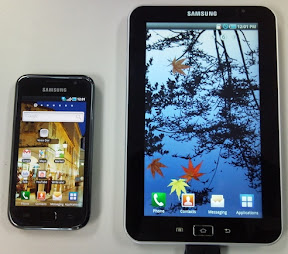 Samsung may launch a 7-inch Android tablet based on its new Galaxy S line of phones, early next month at a consumer electronics show in Berlin in early September.

The tablet, which may be called the P1000 Galaxy Tab, is reported to have a front-facing camera for video calls, something lacking in Apple’s iPad, but available on the iPhone 4. It’s not yet clear whether the Samsung tablet will go on sale first in Europe, when it will be available in the United States, and what its cost will be.

But the device may have more promise than many of the Android tablet efforts so far , including Dell’s Streak, with a 5-inch screen. It went on sale last week and has met with tepid reviews so far.

The iPad, with a 9.7-inch screen, has sold more than 3 million units since April, when it went on sale. With that healthy head start, it might be difficult for other manufacturers to try to get a foothold in the tablet market.

Those that use the Google-based Android operating system may stand a better chance. In the last year, the worldwide smart phone market grew by 50 percent, “driven in large part” by makers of Android phones, said IDC Research recently . Samsung, in particular, posted the highest year-over-year growth rates among vendors, IDC said, with a 172 percent increase.

The Galaxy S phone, new on the market this summer, is one of Samsung’s smarter smart phones, with a 4-inch screen, 1 GHz processor and a “Super AMOLED” screen for brightness and battery savings.

The phone is being sold by all four major wireless carriers in the United States, with different names. Sprint is calling it the Epic 4G (which means it can run on Sprint’s fourth-generation cellular network); AT&T calls it the Captivate; T-Mobile, the Vibrant, and Verizon Wireless, which is soon to receive it, the Fascinate.

The widespread availability of the phone could also help it do better in tablet form. In addition to the front-facing camera, the Galaxy Tab would also have a 3.1-megapixel camera on the back of the device, another feature the iPad lacks.

The Samsung tablet would also support Adobe Flash, which is used to watch Web videos and animations. Apple has resisted using Flash for the iPad and iPhone, citing issues with battery drain, security and stability.