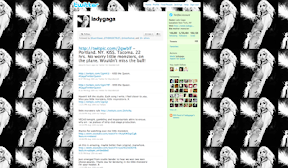 Britney Spears reign as Twitter queen has come to an end thanks to fellow pop superstar Lady Gaga.

For a very long time Britney Spears was the Twitter queen, however, the time has come for a succession. Lady Gaga has stolen the crown. With 5,702,978 followers as of this writing, she barely passes Britney Spears’ 5,684,642.

It’s unclear what might have caused this change. It might be because people would rather follow someone who is interesting and different than someone who has been in the spotlight since 2000.

What is known though, is that Britney has been passed, and she’s going to have to put up a tough fight if she wants to regain her position.